At different times of my life, different parts of the Lord’s Prayer have been extremely important to me. (At the moment it is: ‘On earth as it is on heaven’ but that is for another time. About five years ago it was ‘Forgive us our sins as we forgive those who sin against us.’  It struck me that if we did not have people to forgive we were probably not doing the Christian thing right. We weren’t trusting people enough, letting people close enough to us, risking enough or being generous enough.

I was reminded of this again today at a meeting of Christian leaders in Birmingham who had gathered to discuss the subject of ‘reconciliation.’ We got on to talking about enemies,  in particular loving our enemies,  and many of us around the room (but not all of us) concurred that we didn’t have many, if any, enemies.

This might seem like a good thing. It might even seem like an admirable, Christian thing, but it is worth remembering that Jesus did have plenty of enemies and we were challenged about whether we are doing enough truth-telling in our churches and in our neighbourhoods.

What also emerged out of the conversation was that we might not think we have enemies but we might be regarded as enemies by certain people.  This was bought home to me recently by a meme circulating on Facebook about Jeremy Hunt at the time of the doctors’ strike. 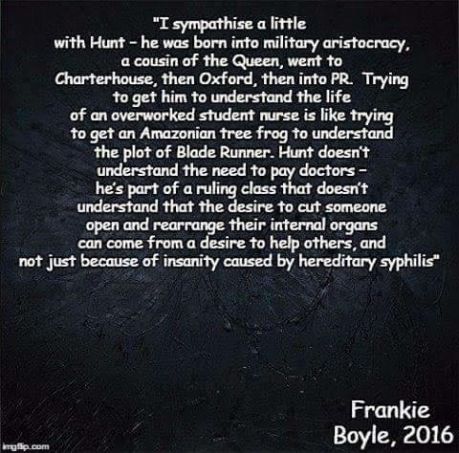 While I am not as posh as Jeremy Hunt and I failed my Oxbridge interview, my background is not that dissimilar to his. (A good friend recently described me as ‘salt of the earth posh’) Many of my school-friends are from this background and many of them (not all) are wonderfully compassionate people who have plenty of empathy. But this meme was liked and shared by people I like and I realised that my friends from teenage days and I are regarded by many as an enemy.

In journalism you can commit a group libel if you say something that incriminates a small cluster of people meaning individuals can be identified. I guess this kind of enemy-creation is a group thing. And it’s entirely understandable. But what it means to me is that I have enemies – I can be judged for things outside my control. Things like my Government’s foreign policy, the actions of my ancestors, my accent or my skin colour. Some groups of people have known that for ever.

Jesus calls us to love our enemies. Writing as someone from a privileged and central position in society, this now offers me a new challenge. Who are the people who might have reason to be angry with me beacuse of my privilege? Who are people who have suffered at the hands of people like me? Who are the people who have been excluded where I have been included? These are the people I am called to love. I have been spending the last 5 years of my life banging on about making friends with people but now I think I will go out and look for my enemies – and when I recognise them, I hope I will be compelled by the love of God among us to seek justice with them with a renewed vigour and urgency.

One thought on “Who is your enemy? A note to the posh among us….”