This weekend I have felt heartsick. I have been (even more) addicted to my phone – watching and reading every bulletin that comes out of the Calais camp. Just a week ago we were there – only for two hours, but in that short time we saw humanity writ large and I feel like I left part of myself in the makeshift town of thwarted aspiration, resilience, community and conflict.

The three of us that literally popped over to Calais on a Sunday afternoon were asked to reflect on our visit for the Church of England Blog – I was reluctant given how many other people have a far more profound connection but we gave it a go. On the day we dropped off our suitcases and rucksacks the particular warehouse we visited had already had 30 loads of aid dropped off. We met people who have donated a year of their time, others who have left jobs and families. These people were doing all they could to be with those who were risking their lives to get to the UK. In both refugee and volunteer was hope and despair, weakness and strength, compassion and irritation, fear and love  – humanity writ large. And that humanity has got under my skin. Our blog is below:

Sitting in a meeting, planning what we, a group of friends from different faiths who live in South Birmingham, could do to support people living in the Calais ‘jungle’ I glance at my phone. There is an appeal for suitcases and rucksacks as thousands of people prepare for an eviction.

I had no idea that two weeks later I would be sitting in a café on the camp, eating a delicious meal of Afghani eggs, spinach and chicken having delivered around 100 pieces of luggage, tents, sleeping bags and some winter clothes to a warehouse in Calais.

The aid was donated by two churches, one Anglican church where I am a curate and one free church where another member of the group, Fred, worships.  The loaded minibus was lent to us by Birmingham’s Central mosque, where one of our friends, Abdullah, has many connections.

We only spent about two hours at the camp. We met people there and at the warehouse who had given days, weeks, months and even years to be with and build relationship with this fragile community.

I have talked political footballs before but never have I seen it.  The anxiety and grief is almost tangible among the people in the camp. As we sat with volunteers from the youth service, a stream of young men came and asked for some kind of certainty, hungry for hope, unsettled by the threat of eviction.  Bulldozing the jungle is not only about moving people’s location – it is about taking away the infrastructure that offers flimsy support, severing relationships that offer some comfort, breaking up communities of people who have roots in the same countries and disrupting the work of schools, libraries, warehouses, faith groups and humanitarian workers.

I was not expecting to spend time at the camp but Fred had a contact there, a young woman from his church, who is working with the youth service.  Fred says:

‘We met  Dannie who has been working in the Jungle as a volunteer for several months in the grandly titled role of Female Minors Education Co-ordinator for the Refugee Youth Service, teaching English to refugee children. We thought we would give her some encouragement, some warm socks and some lactose-free milk as a treat, and in return she took us into the camp and shared something about life there, enabled us to feel the atmosphere and meet a few people, both residents and volunteers. It cannot be overstated how tough life is there and how tense the atmosphere is, with a permanent under-current of violence and oppression where extremely impoverished people anxiously await details of the arrangements for the closure – no one expects a positive ending and there are few causes for hope and optimism.

‘Dannie  is an extraordinary young woman in her early twenties who saw reports of the camp from her home in Birmingham, responded by making a few visits with donations and then signed up as a volunteer. The experience has inevitably changed her. It was really humbling for three middle aged people to have their safety in the hands of this diminutive young woman who understands how the camp works, knows the unwritten rules, is alert to the danger signals and yet retains an obvious warmth and compassion in her relationships. She is not unique and there are many like her, particularly women, who invest their energies and skills and an enormous amount of emotional energy in the people they support, particularly the young. As the tension builds the camp residents expect them to know what the authorities have planned but they know as little as anyone else.

‘When asked how long she will be there, Dannie replied ‘For the duration whatever that looks like!’ – a challenge to us day trippers who merely had to drive for a few hours back to our safe homes in the Midlands, a journey closer than travelling to Cornwall. I am left celebrating that there are courageous people who are willing to draw on their faith to stand and work alongside those who need them most and lamenting that this is travesty is happening on our doorstep and nothing  suggests that there will be a positive resolution.’

For Abdullah the collaboration across faiths and the relaxed friendships within our group are a sign of hope – in a situation when hope is at short supply.

He says :‘We wanted to respond -this led to a last minute scramble for minibus, all types of bags and tents – But how would this be possible in only a few days?

‘It was all possible because Central Mosque allowed us use of the mini-bus, the amazing Christian community stepped in and collected a van load of bags and tents.  All that was left to do was delivering the aid in the name of God and humanity to the persecuted and less fortunate.

‘The journey across country and into Calais was made by me, Jessica and Fred, a group of cross faith friends who wanted to make a difference and bring hope.  It was a fantastic journey which took us from one country to another within a day, into the unit in on the outskirts of the town and finally into the jungle which was both charming with a community atmosphere, but also could become sinister and edgy at the drop of a hat as we were about to find out.

‘The amazing volunteers at the warehouse were from all over the world and they all helped to unload the bags, and while making us tea told us of horrific stories of neglect and suffering the refugees faced on a daily basis.  They were amazing, but even more amazing was Dannie, the young  Christian volunteer who wears her heart on her sleeve, and when taking us into the heart of the jungle was shown amazing affection by the residents of the camp.  The community spirit in the jungle was clear to see, but nothing would be possible without the amazing volunteers who are doing all they can to make their lives more bearable in the face of such difficulties and adversity.

‘As we drove back I felt in more connection with my Christian brother and sister, Fred and Jess, and I saw the same humanity in them that I feel in my heart as a Muslim.  Then why do we try and separate and differentiate?  I know that through conversations and dialogue we can overcome so much, and truly understanding what each other stands for can definitely bring us more closely together.

‘I do not know what will become of the amazing refugees living so desperately, yet smiling, and how they will cope with losing the place they have made home.  The jungle is a thriving community and its inhabitants have made it as close to normal that you can get in such circumstance.   But what now?  So many questions, but we have decided as brothers and sisters from other faiths that we will continue our mission in coming weeks, months and years to reach out to those less fortunate, and spread the word of God through our actions.

‘May we all get to know one another as much as I have got to know Fred, and Jessica, and I pray for everyone to live in peace and harmony.’

Our little group, Balsall Heath Solidarity, was planning a longer trip to volunteer at the warehouse in December. We would be people from Jewish, Muslim and Christian backgrounds aged from 17 to mid-50s but of course we have no idea if we can go and what will be there by then. But what we do know is that people who we are told are ‘other’ from us can become our good friends. We can share sorrow and joy together as we did in that minibus. We can laugh and weep together. We can be inspired by the faith of the other and celebrate our differences.

The young men we met in the camp are no more ‘other’ than my neighbour in Balsall Heath. The 13-year-old who has experienced unspeakable traumas on a perilous journey has the same emotions as my son.

As Christians we believe we will be judged on how we responded to people who have no clothes, who are hungry and thirsty, who are strangers or imprisoned. (Matthew 25 31-46). The faith communities must continue to campaign, the people must pray and we must learn in our neighbourhoods the practice of our faith in hospitality and generosity. 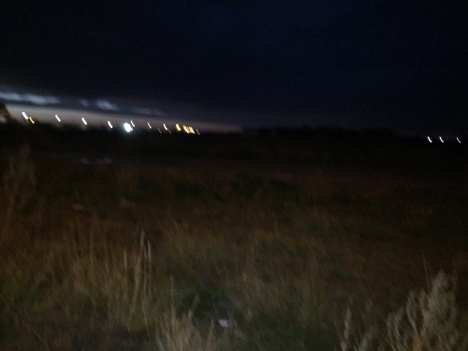 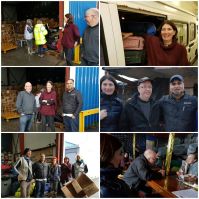 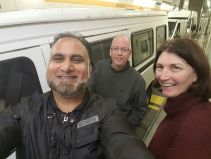 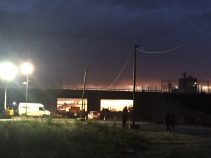 4 thoughts on “Reflections from the Calais ‘Jungle’”