When my phone rang on my birthday and I was asked if I wanted to go to Denver as part of an exchange focusing on countering extremism my response was both yes and no. Of course I wanted to visit another country with a great bunch of people but I have never really considered that anything I do focuses on countering extremism. But I said yes, setting off with some trepidation- unsure what I have to offer.

I am so glad I did. I learnt a lot, laughed a lot and came back with some wonderful new friendships and strengthened relationships. I still can’t believe that a working trip, exploring a serious issue could be so much fun.

I am still no expert on countering extremism but  I continue to be inspired by one of the phrases I remember from my recent trip to Israel which was spoken, I think, by a Palestinian politician. He said: to fight extremism you have to strengthen the moderates. I think this is true in many ways and applies to religious as well as political life. I often wonder how we make ‘middle-of-the road’ Anglicanism look so boring. And, while it would be naive to think we do not need a Counter Terrorist Unit and appropriate support and safeguarding for those at risk from violent ideologies, my time focused on countering extremism has convinced me that we need to continue to strengthen the moderates. If the world can be viewed as a sandwich, we need to work together to ensure the filling is as thick and as tasty as possible and the edges are getting further apart and thinner and thinner.

This does not mean the middle is a homogeneous mush of blandness – but it is individuals, groups and communities who see the worth in one another and are committed to a greater good. People from many different political backgrounds, faiths, ethnicities and backgrounds who love their neighbour, their city and look for goodness, justice, mercy and generosity in their private lives and public systems.

That is it about countering extremism – below are my musings more generally after the week’s visit.

So back to America Vs England: Patriotism 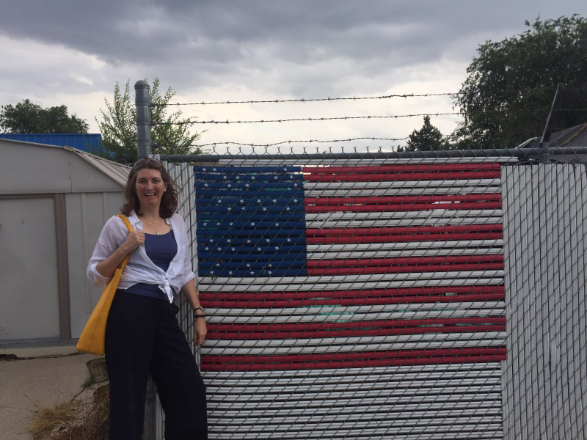 If I were an Americans writing this blog I am pretty sure that I would have added -‘a person who loved their country’ into the last paragraph. Flags are part of daily life, swearing allegiance is normal and patriotism is not problematised. Many causes and campaigns happily use the stars and stripes in their campaigning – eg Hate Has no Home.

Do we have something to learn? Could a strong, positive national identity actually help us develop into a more inclusive and integrated society?

A Denver participant on the exchange joked that Americans would see a therapist if an episode of their favourite soap was rescheduled. We generally think that that obsession with therapy is a bad thing but we also saw some good sides to this national hobby particularly in relation to refugees.

I remember feeling truly ashamed of our country when I discovered that creating ‘a hostile environment’ was a deliberate policy developed by Theresa May. In contrast we saw city departments dedicated to the welcome of migrants, free mental health services provided by post-graduate students at Denver University, a ‘resilience centre’ offering drop-in mental health support to refugees, asylum seekers and others affected by trauma. ‘Undocumented’ people have access to education and entrepreneurship amongst refugees is encouraged and supported by local government. This seemed a lot, lot better than the situation we have in the UK. I perceived that refugees were trusted and their trauma recognised while their potential was welcomed – this may not be all the time and everywhere but it was good to see and contrasted starkly with some British attitudes.

Were a complete nightmare. Their acceptance was astonishing. They made policing difficult in a myriad of ways. They took lives in collateral damage. They were permitted everywhere. Declaring a college a no-gun zone was deemed ‘unconstitutional.’ Young people living in poor areas were shot and feared being shot. Security in many buildings was tight. We never want to have a gun culture like the US. It feeds off and creates layers and layers of distrust and fear. (My American Godmother and others like her also think it is bonkers and the constitution is being poorly interpreted.)

This picture is not from America – it’s from Yorkshire! 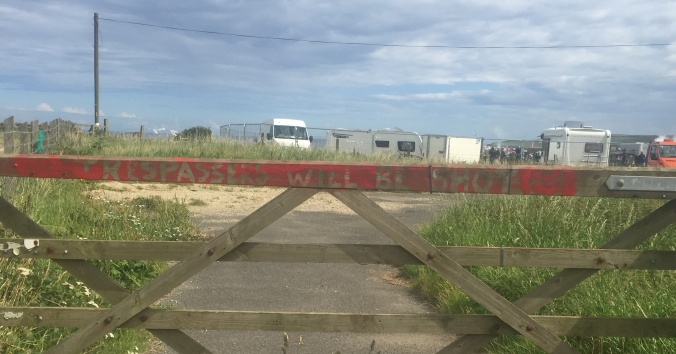 Like guns, cannabis is legal in Colorado. This has raised some $5 billion in taxes and caused a population explosion of young entrepreneurial hipster-types. The money is funding schools and non-profits. However no-one is sure what the shadow side really is. There are rumours of a cannabis-inspired homicide and a fatal accident in which a young man jumped off a balcony. Cars are being driven (and guns used) by people who are high. Cannabis use is sometimes linked to psychosis. It is hard to control the strength of the products being sold – especially edibles. Good or bad – no-one seems to know.

As is being currently demonstrated in Charlottesville, America has a problem with White Supremacy. In Denver, two or three generations ago, many civic leaders had been Klansmen. White supremacist movements and organisations continue to flourish in Colorado. Some of these have a Christian-based identity. This was deeply unsettling. Racist ideologies also flourish in the UK. Does the church have a role to play in interrupting such narratives here? We do know that far right groups in the UK connect with far right groups in America.

One man challenged us by saying that displaying images of a white man and naming him the son of God/God was an act of White supremacy. (He also said to have images of a black man on the cross and name him God would be an act of Black supremacy.)

Many far-right groups also support a virulently anti-LGBTI agenda. Many of these are churches and religious institutions. Clergy are protesting at Charlottesville today, the Bishop of Wolverhampton has declared a Britain First demo to be blasphemous – with whom should the church be working here to counter racist ideologies and other hate-fuelled beliefs?

The Episcopalian church in the USA has certainly distanced itself from homophobia in recent years and I am sure there is much we can learn from them on this and other issues too. The church in Denver appeared to be engaged in projects to support people living in poverty and we attended an interfaith event hosted by Denver Cathedral. But instinctively, I felt grateful for the parish system that roots and grounds us in a community. We, Anglicans in England, need to make sure we do not lose that or we could risk being a gathered club for people who happen to like worshiping in the same way as us and believe the same things as us. Some churches successfully navigate this without a parish system but I think a commitment to all people in one neighbourhood is really important. We are shaped by our context and in turn we hope to shape our context. We engage, hopefully, with the people who live close to us and we seek to reflect the diversity of our community in our congregation.

It seemed as tho’ people in American (when they had not been replaced by i-pads) were happy to serve food and drink and generally meant it when they said things like ‘Good job’ or ‘You’re welcome.’ Hospitality was generous and commonplace – especially at breakfast. We particularly liked coffee-boxes. Communication, on the whole, felt less complicated than the UK. Satire, particularly Trump satire, was everywhere.

Other random things – pedestrian lights don’t beep (bad), snacks are healthier and more interesting, cars are everywhere, the grid system keeps things moving and is so simple it is nearly confusing, Denver has an amphitheatre that is a gym by day, bars shut early (bad) and the hotel had a bagel-cutter (essential).

I leave you with this:

One thought on “America vs England – a rough and superficial comparison following a week long visit.”